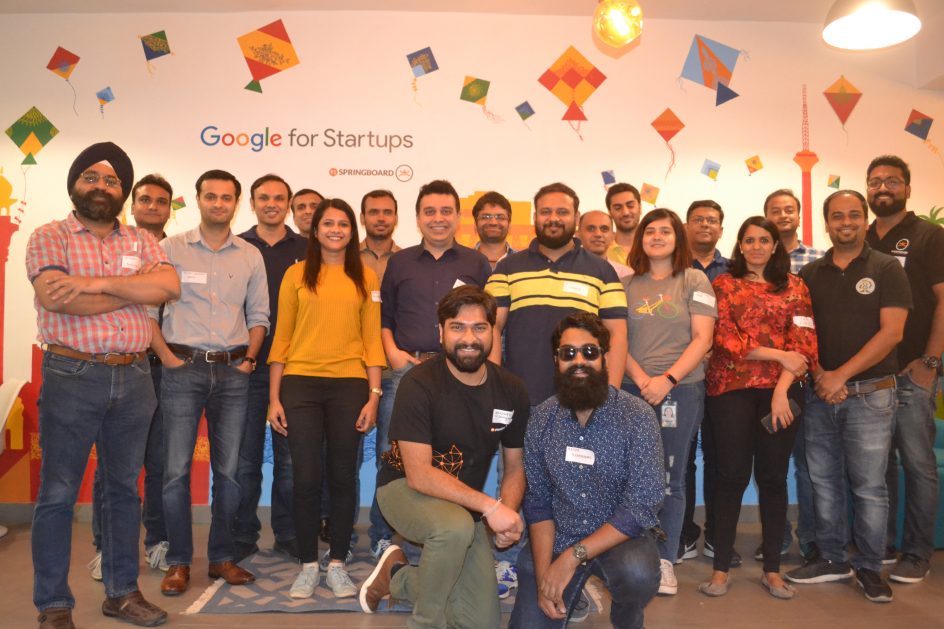 Being an early stage startup is no easy task. In fact, it’s quite a thankless job that entails long hours and lots and lots of hard work, dedication and patience. You could have the coolest idea known to man, but if you do not have the correct resources in place, the chances of success are slim. What this tells us is that the right mentorship and resources are a make or break when it comes to early stage startups.

Google realises that and has created ‘Google for Startups’ – an initiative to help startups thrive across every corner of the world. How, you ask? By bringing the best of Google’s products, connections, and best practices to enable startups to build something better.

And if you think about it, what could be a bigger goldmine of resources, tools and mentorship for startups than Google itself.

Did you know that 70% of startups that receive mentoring survive for 5 years or more? That being said, we’re extremely proud to be the sole Indian partners with Google for their Google for Startups initiative, and recently concluded a 12-week long Startup Advisors Program that involved pairing select high-potential tech startups from within the 91springboard Delhi community with Googlers.

This 12 week OKR driven program helped startups to set 3 OKRs (a widely used framework for setting and tracking goals that’s used by Google and many others) and work towards achieving them under able supervision from a dedicated startup advisor. Startups were matched with a relevant advisor from Google for the entire duration of the program. They also got access to top support matter experts and advisors from within the Google & 91springboard network.

Now let’s dive into some of the key takeaways the startups and Googlers shared with us from the first cohort of startup advisors program in India.

Fitbots is a conversational intelligence platform for OKR engagement & checkin. It enables employees to set OKRs, give and receive continuous feedback and appreciate one another.

With this in mind, Fitbots OKRs were set around user experience and business development. Neil Taskar from the Google Adwords team was the perfect match for Fitbots and he helped them with various marketing initiatives and strategies that helped them leverage the digital domain.

“After participating in the design sprint workshop organized during the program by Valli Ravindran (UI/UX Lead, Google), we have redesigned our landing page and improved the home screen experience which includes adding new features to the product. This has increased the user experience of the platform by 30%.”  – Vidya Santhanam, Co-founder/CEO

They improved their product in order to focus on the most important features they needed to deliver. The OKR workshop helped them to set their own OKRs more clearly and gave more visibility to the product and engineering teams.

How did the Google Startup Advisors help?

ReferHire: Developed a clear plan of execution for the next 6 months

Referhire is a peer to peer social hiring platform that makes searching for talent easier. Their OKRs were set around user experience and user acquisition and they were paired with Chinmay Gavankar, who handles strategic and enterprise sales at Google Cloud.

ReferHire was given clarity on what needs to be done for the next 6 months and their main focus was on increasing the user onboarding.

Chinmay helped them connect with specific SMEs as well as various UX experts at Google in order to create a roadmap for the next 6 months.

ReferHire also worked with a AI/ML Specialist from Google – Dr Ashish Tendulkar during the program.

“We formed valuable relationships with Googlers who are SMEs in the areas we’re working on. We hope that we can continue building on, and leverage these relationships, going forward.” – Rohit Tewari – Founder

EduRev is a personalised teacher for students from the age group of 12-25 that lets you access videos, notes and tests from teachers. Not just that, it also enables understanding specific weaknesses of students in order to facilitate future guidance.

Edurev’s main focus was around increasing revenue and their OKRs were set around monetisation, user acquisition and business development. They were paired with Giribabu Madathala, a Partner Program Manager at Google who has a penchant for EdTech.

Edurev really enjoyed the process of setting their OKRs and  guidelines after the kick-off event and the program greatly helped them create a good culture within the company.

Their advisor Giribabu introduced them to Neil Taskar from Google Adwords team where Neil was able to identify their problem statement and analyse the business in order to give them a fresh perspective on things.

After which, they managed to increase their ARPU (Average Revenue per User) significantly. This has consequently helped them increase their overall monthly revenue by 3.5x as compared to what they were doing 3months ago.

Going forward, they are doing a complete redesign of their login process which will be completed within the next 1 month.

Instalocate is a smart AI travel assistant which predicts your flight disruptions and gives you instant payouts if you face any delays or cancellations.

Their OKRs were set around marketing, business development and product strategy and they were paired with Jaydeep Deshpande, Head of Enterprise Marketing at Google Cloud.

Their biggest win was launching their travel pass product with a successful pilot. After joining the program, Instalocate moved its operations to GCP and saw a 100% reduction in the computing speed. KC (Google for startups program lead) and Jaydeep helped them with this transition and in utilizing GCP better. Previously, their prediction algorithm used to take 23 minutes, after shifting to GCP it reduced to just 3.1 seconds. Impressive, right? Chinmay Gavankar from Google also taught them how to pitch to corporates.

“While brainstorming with our mentor, we discovered a completely new product line for Instalocate. We are in the initial stages of research of this product. If this product is launched, it has the potential to completely disrupt the travel insurance industry.” – Ankur Jain, Co-founder

Their OKRs were set around customer acquisition, product strategy and monetisation and  they were matched with Dhiraj Narang, Strategic Partnerships Lead at Google.

QDC increased their revenue in the last 3 months and over achieved their OKR.

QDC’s advisor Dhiraj helped them with marketing efforts and sales pitches which helped them in selling the product to 11 customers.

“Just one word to describe 91S team – AMAZING. We have been associated with 91S for more than 3 years now and this team just do not stop surprising us. We thought they were just a co-working space but we were wrong. It is a whole 91S world , the ecosystem they have created for start ups is unmatched. You figure out a problem, they have a solution for it. Partnering with Google has taken the power of this ecosystem to the next level. The folks from Google were always available and made us feel like we were all a part of the same team” – Vivek Saini & Rachit Ahuja, Co-founders

Not only did they do well at tackling the initial challenge of identifying a solution to increase ACV from existing customers; but, after speaking to their advisor Dhiraj, Mudit and Viswa from Google, they also identified bottlenecks in their software infrastructure and figured out a way to improve it through the Google Cloud Platform.

Their OKRs wereset around UI/UX strategy and product strategy and Litifer were paired with Srijith Santhosh, UX Engineer at Google.

Litifer’s main aim was to make the toy engaging and their major win during the program was launching their product.

They learnt several important lessons in regard to expanding their team and focusing on sales.

The design sprint workshop helped them in doing better customer interviews where they got honest feedback from users, which in turn, helped them improve their product.

They also identified ways of increasing user engagement & creating faster product iterations and learnt about rapid hardware prototyping, sales and OKRs, all through the course of this program.

Their OKRs were set around product strategy and they were paired with Sudivya Dubey from the Google Cloud Sales Team.

They launched two new products; Zimyo performance and Zimyo Payday. The program helped them gain insight into product development and implement OKRs within the company.

“I’ve previously run a startup in Jammu and had less or no access to resources and mentorship. Hence, I really value the power of mentorship and want to give back to the startup community.” – Sudivya Dubey, Advisor to Zimyo & New Business Executive, Google Cloud.

This was all that happened in our 12-week Startup Advisors Program and might we say, that we couldn’t be happier with how it all turned out. For one, it was great to see the chosen startups take us through tangible things that they had achieved through the course of this program. As you know, we’re all about community and so this program warmed our hearts in more ways than one. We will be having another Startup Advisors Program sometime next year. So, stay tuned for updates.