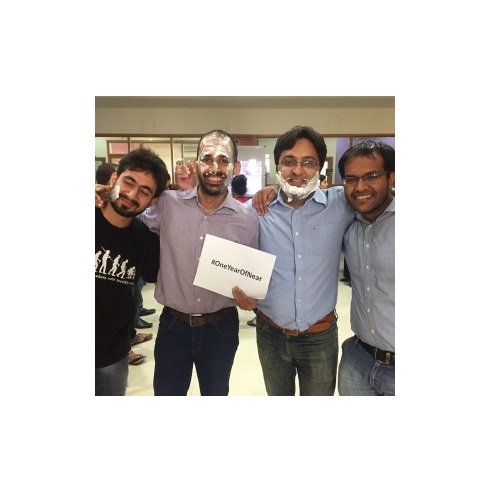 ‘Near.in’ marked their 1 year anniversary with the 91springboard family on 18th July 2015. Here is their story.

In May 2014, 2 months before forming ‘Near’,  Lomesh, Akshay and Sunil became members of 91springboard Gurgaon. When the entrepreneurship bug first bit, they were confused about how to proceed as they were constantly getting new ideas. Sometimes they’d think of building a photo sharing app, sometimes about another service platform, and on and on went the list of ideas.

The time they had spent in the US made them realize that India desperately needs a platform that enables the common man to find affordable service providers easily. This marked the beginning of ‘Near’ aka Near.in. The name was chosen as it signifies the proximity between consumers and service providers.

They were all set by October and launched ‘Near’ in November 2014. It was not an easy journey. In true bootstrapping fashion, their first few months were spent roaming the streets of Gurgaon in the scorching heat, just to sign-on efficient and trustworthy vendors. All the hard work paid off eventually when they landed sizeable Angel investor funding by January 2015.

Thereafter, they’ve been busy expanding across locations. From just a few vendors in Gurgaon, they have partnered with 4500 vendors in 500+ categories and services in 4 cities – Delhi, Gurgaon, Bangalore and Mumbai. So, the next time you need a carpenter, party planner or even a yoga trainer – just download the Near app or go to www.near.in.

Their journey has been a remarkable one – from a founding team of 3, they have now grown to 13 members. The mission, however, remains firm – solving the crisis faced by consumers and service providers.

To celebrate this achievement, we threw them a small surprise party. Why? Because we love what our members do and our success lies in theirs.[/x_text][/x_column][/x_row][/x_section]