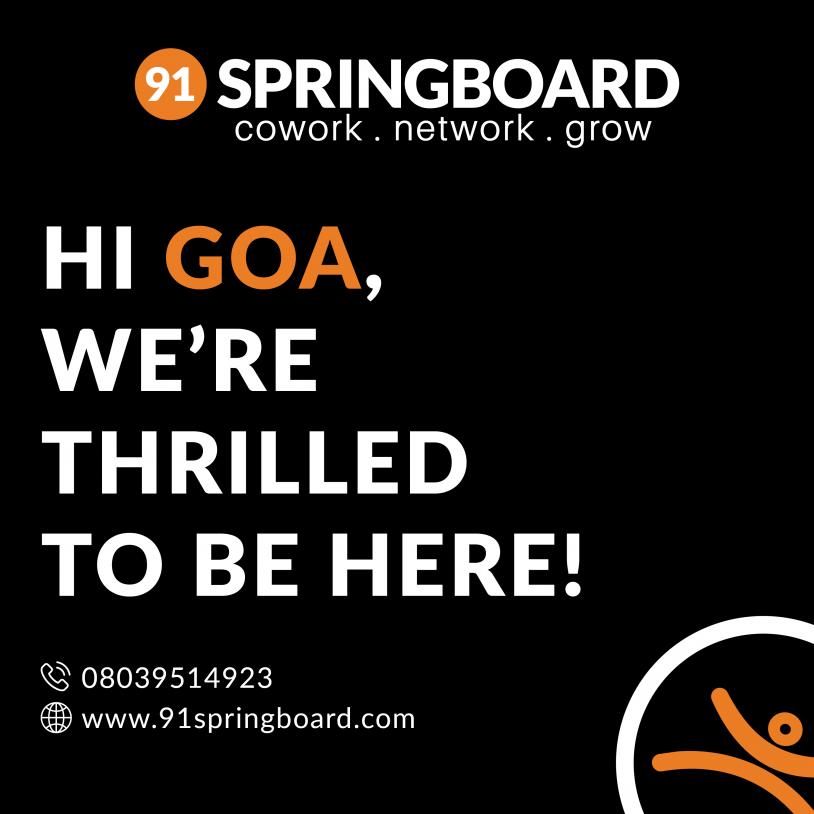 In the first week of October 2017, we at 91springboard opened our 14th hub in India; a 300-plus seater coworking space in central Panjim, Goa’s capital city. This is not news in itself; 91springboard has started 13 hubs across 7 cities in India in the last 3 years. Yet, this hub is different, as it’s also the new central HQ of 91springboard. Yes, you heard that right, our new corporate HQ is in Goa.

All Work and More Play

It’s something we have all experienced. You’re on a flight back from Goa, heading to Delhi or Mumbai or Bangalore, thinking to yourself, “Man, I wish I could live here!” It’s a feeling almost everyone who visits Goa goes through as they leave the state, famous for its outstanding natural beauty, white sandy beaches, and cosmopolitan community. Soon enough, though, we are in the cruel grasp of reality. What would we do there? We can’t live in a shack forever, and it’s not like there’s a business hub in India’s sunshine state to work out of. Well, we at 91springboard like to look at ideas everyone else would think is wishful thinking and say, “why not?”

91springboard has always believed in the maxim of “work hard, party hard”. It is a philosophy that is reflected in the way we operate our coworking spaces across India. We like to create environments that enable entrepreneurs and professionals to perform beyond what they thought they were capable of while also ensuring they have fun in the process. As employers, we also place a lot of value on a strong work/life balance, and a HQ in Goa is the best way to ensure that our team has as much fun away from work as they do while at the hub. Away from the crowds, hustle, and noise of India’s metropolitan cities, Goa offers the opportunity for a tranquil, relaxed, and less stressful work environment, with the beach just a 5-minute drive from the hub itself.

However, moving our HQ to Goa is not just about ensuring we can spend our weekends exploring India’s most popular international tourist hub. It’s also a sound business move, placing ourselves in a position to exploit imminent opportunities in the world’s most exciting emerging economy.

From Panjim to Pan-Global

Panjim was one of the cities selected by the Ministry of Urban Development as part of the government of India’s Smart Cities Mission; an effort to ensure urban growth in India is planned, sustainable, and citizen-friendly. A pet project of India’s current Prime Minister, Narendra Modi, the mission aims to relieve some of the immense amounts of pressure placed on India’s existing economic centres of New Delhi, Mumbai, Bangalore, and Hyderabad in the form of people and resources. By setting up one of the first ever coworking spaces in Goa, 91springboard has established itself as a major player in a location that is bound to see rapid expansion in the coming years. Furthermore, Panjim is almost exactly equidistant from Mumbai, Bangalore, and Hyderabad; the existing major hubs of innovation, entrepreneurship, and technology in India. Thus, it is ideally placed to look out for new and exciting developments and seize upon emerging opportunities across these three major centres of global commerce.

Panjim also offers 91springboard with opportunities that are unique to its location and would be harder to come by in other cities. As one of the biggest international tourist hubs in not just India but the world, Goa sees nearly 700,000 international visitors a year, a figure that has been growing by over 30% a year consecutively for the last two years. In 2017, Goa had already seen over 300,000 international tourists by March, and it is expected to cross the 1 million mark by the end of the year. This is an unprecedented opportunity for the 91springboard Goa hub to establish itself as a prime location for people from across the world to come and enjoy the benefits of a 21st century workspace, one that will help ensure that their vacation does not end up with them having to return to a Himalayan backlog of assignments when they get back home. The facilities on offer at the hub could even help international members extend their stay in India, or possibly even set up shop here; a prospect that is already exciting many an expatriate.

The idea that a company’s HQ needs to be in their country’s biggest economic hubs is not applicable in the modern, interconnected global economy. After all, when Microsoft set up their corporate HQ, they chose the town of Redmond, Washington; whose closest major city, Seattle, was more famous for its weather and music scene than as a center of technological innovation. Of course, today, Seattle and its neighboring towns are one of the biggest technological and creative hubs in the US; but back when Microsoft moved to Redmond in 1979, it boasted a population of a tad above 20,000 people, and even today is home to only around 60,000 citizens. Similarly, companies such as Apple, Google, and Facebook set up their corporate headquarters in Cupertino, Mountain View, and Menlo Park, respectively; all relatively small towns that were not always known as major economic or business centers, that is until the revolution sparked by those famously innovative and disruptive organizations.

While we at 91springboard do not see ourselves as the Indian Microsoft or Google (though aspiring to those levels doesn’t hurt), we do respect the vision and foresight it took for them to eschew setting up their corporate HQs in the already crowded and expensive financial districts of New York, Los Angeles, or Chicago; choosing instead to establish themselves in places where their employees could enjoy all the benefits of modern living with comparatively fewer drawbacks.

Gone Goa, Where Next?

Over the next couple of months, we will relocate our central team to our new hub in Panjim, while also expanding our operations to newer hubs across India. 91springboard’s latest hub in Mumbai’s bustling business district of Santacruz is expected to launch very soon, with bookings already open; so you can book your own private cabin or open workspaces here. You’d better hurry up though, our early bird discounts are going fast!

As for Goa, well all our members get the benefit of working out of any of our 14 (soon to be 15) hubs across India. So, if you’re already a part of the 91springboard community and are planning to celebrate your vacation in Goa, maybe you can consider paying us a visit. We’d be happy to see you!