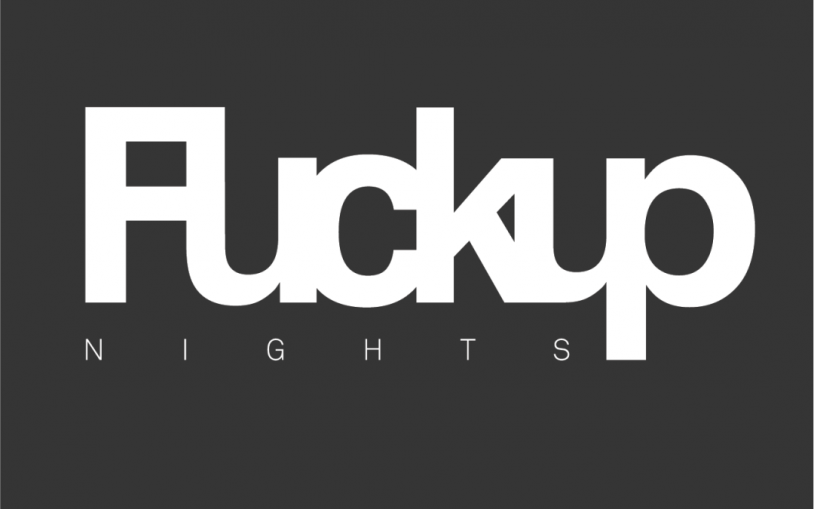 The Noida edition of our infamously named property, Fuck Up Nights took place last month and was a roaring success. As always, we had established entrepreneurs take to the stage and talk about the many fuck ups they’ve made over the years and how those fuck ups are one of the primary reasons they are who they are today; established entrepreneurs with extremely successful startups. In this post, we’re going to be talking about Bharat Sethi, CEO & Founder of iDecorama, who also founded PosterGully in 2012 which he eventually sold in 2016.

Here’s a look at his fuckups, which he termed as ‘defining moments’:

Defining Moment #1
Firstly, Bharat spoke about the various jobs he had before he started up on his own and how those jobs led him to realise that he wanted to startup on his own. He quit his first job in four days and his second job in four months. The common problem with those two jobs wasn’t that they were bad jobs, it was just that the people there weren’t looking to do anything path breaking. They were more than happy following a daily routine which was nothing short of monotonous. This made him realise that he wasn’t working with the right people and that he had to start something of his own.

Defining Moment #2
He then went on to tell us about an incident that took place a week after he started PosterGully back in 2012, that gave him the confidence to trudge forward and not give up. (which is something that every entrepreneur feels like doing multiple times a day) Bharat was travelling in a bus with his laptop which contained every little detail in context to PosterGully on it. We’re sure you’ve already guessed it but yes, he did lose his laptop and soon realised that hadn’t taken a back up. Obviously, he was shattered and the first thought that came to his mind was, “to hell with this startup nonsense, I’m just going to take up that fancy investment banking job that I’ve been offered. Let’s shut shop!”. Well, that clearly didn’t happen. Instead like any true entrepreneur, Bharat decided to march on and take every challenge he was faced with one day at a time. At this point, he was 22 years old and had no clue what a VC was and what in God’s name a pivot or product market fit meant. However, he didn’t let this incident faze him and instead he decided to take it as it comes.

We know this is something you must’ve read in a 100 other articles, but it really does hold true. Perseverance is by far the most integral quality an entrepreneur needs to possess, in abundance.

Defining Moment #3:
Another major defining moment in the life cycle of PosterGully was when they were runners up at a startup challenge hosted by Bits Pilani which guaranteed them funding of Rs. 10,00,000. Bharat and team were all prepared and had quit their day jobs in order to pursue PosterGully full time. However, as luck would have it the accelerator that promised them the funding shut shop a week before the funding could come through. The team didn’t lose hope and thankfully PosterGully was doing very well on the sales front, which helped them stay afloat and not completely lose hope after the funding didn’t come through. (Sidenote: Another major lesson in perseverance)

Defining Moment #4
By 2013, PosterGully was a team of roughly five people. Now, being like any other 23 year old, Bharat was obsessed with operations and micromanaging things and wasn’t the biggest fan of delegating tasks or taking other people’s advice. He was working about 16-17 hours a day and processing about 300 orders a day. Yes, you heard that right! Then one fine day, while packing orders, Bharat was using a blade and cut himself quite badly and fainted. He woke up to a concerned sister asking him what the hell is he doing and that he can’t go on like this. That’s the day he decided either he’s going to do this with people or not do it at all.

Defining Moment #5
Then PosterGully really took off. They were doing about $1 million worth of business a month with a small eight person team that was working out of a flat in West Delhi. Bharat, again being a typical 23 year old, thought that they must continue doing things exactly the way they’re doing them as their revenue obviously meant they were doing something right. Then one Diwali evening, Bharat got a call from an agitated customer who didn’t think twice before exhausting his entire vocabulary of curses on him. Bharat’s response was quite the contrary to what you’d expect. He barked back at the customer and made him realise that it was his fault (to hell with the age old saying that the customer is always right; we’re joking guys). This led to him going viral (for the wrong reasons) and he had about a 100+ tweets against PosterGully before the clock struck 12. This made him realise that if he wants to maintain his business as well as his sanity, he’s going to have to set up various departments across the organisation that can tackle problems in a more structured manner. Basically, that winging it isn’t always the best thing to do beyond a certain point.

Defining Moment #6
In 2014, PosterGully started really picking up and they had money pouring from all directions. However, the downside to this was that Bharat saw his PosterGully artworks being sold on other platforms like Flipkart and SnapDeal when in fact PosterGully itself was an e-commerce portal where you could directly buy the art from. And to add to it, these artworks were duplicates and ripped off versions of originals, that were being sold on PosterGully. This was that moment when they had two options; either they surrender and shut shop or they go after the big boys. Well, they chose the latter and sent out legal notices to everyone who was copying their work. This cost them a lot of money but their thinking behind it was that they’d rather be remembered by customers as being the guys who didn’t flinch before going after the big boys. And it worked.

Another thing that Bharat learnt along his way was that your startup can’t take up all your time and space. He initially thought that society isn’t going to help you build your business and so, the only way out is to detach yourself and focus purely on work. This led to his health deteriorating and his overall morale going to an all time low. This is when he realised that work can’t be the only thing you do. There’s got to be some sort of a balance that you strike.

Defining Moment #7
One more major defining moment was when Bharat walked into office one morning only to witness two of his employees who were at blows with one another. Later in the day he found that one of his employees had shared some PosterGully IP with someone outside of the company. He then realised that when it comes to people who work for you, whatever the case might be, you’ll never find people who will all be 10/10 and share the same passion for the product as you do. You, your cofounders and the initial team will probably be on the same page but as you scale and grow, it gets more and more difficult to find people who share the same fire in the belly as you. The sooner you realise this, the better.

Defining Moment #8
Every entrepreneur is always chasing VC’s and investors in order to seek funding and PosterGully was no different. Bharat was going to be meeting a VC from whom he had a lot of expectations as they’d had multiple meetings in the past, all of which went well. However, upon entering the meeting, all the VC did was incessantly WhatsApp people while Bharat was trying to pitch to him. Five days later he learnt that that same VC had funded a competitor. He basically got all the information he needed from PosterGully and went on to fund one of their top competitors. You can imagine how heart wrenchingly painful that must’ve been. This made him realise that running after investors will never work out. Instead, you should try and build a business that translates into something valuable which in turn will make customers and investors run after you, instead of it being the other way around.

“Running after investors will never work out”

This was the story of Bharat Sethi who spoke at the Noida chapter of Fuck Up Nights. He generously shared his story and told us about all his fuckups, defining moments and learnings from the very start of his startup journey.